While your GoPro camera is not equipped with ultra sonic or another motion sensor, it does have a very high resolution image sensor that is active even when the camera is not recording. So simply using the main imaging engine, the experimental motion detection feature uses the differences between video frames to detect when to start and stop recording. This means your camera should be mounted so that it is not moving, so that only subject moves will trigger the capture. Motion detection can be use to capture video of a shy animal in the wild or simply reduce any video captures to only the moments with activity.

Sensitivity    (1-low to 9-very high)
Start Delay    seconds to get yourself out of the way.
Hold Time    seconds, to continue recording after motion has stopped.
Motion Mask    seconds, to avoid falsely detecting constantly moving objects like a ceiling fan, or winds blowing leaves. Anything moving during this motion mask time will be ignored as motion triggers. You can also use you fingers to “paint” out regions you want to ignore (e.g. sky to avoid birds triggering capture, when you are also interested in ground activity, or vise versa.) HERO9 and HERO10 only for the mask feature.

HERO10 Note: For motion detection to work on HERO10, the LCD must remain on. For extended motion captures set the LCD brightness to low.

Note: you will have to manually set the mode in which you capture. Motion detection works is in video, TimeWarp and Timelapse Video modes.

After Capture - Finding Your Snow Leopard (or Backyard Dog)

After a couple of hours of repeated motion capture, you are still likely to have many false positives, resulting in more MP4 files than you need. We have a solution to help you narrow down to the best shots. For each capture start, the camera will create a JPEG showing where the motion was detected. So if you are looking for a ground animal and a bird flies by, the detection would show a patch in the sky. The JPEG is stored in the MISC folder, with a matching file number to the MP4 created. Sometimes it is faster to scan these JPEGs to find the videos you want? 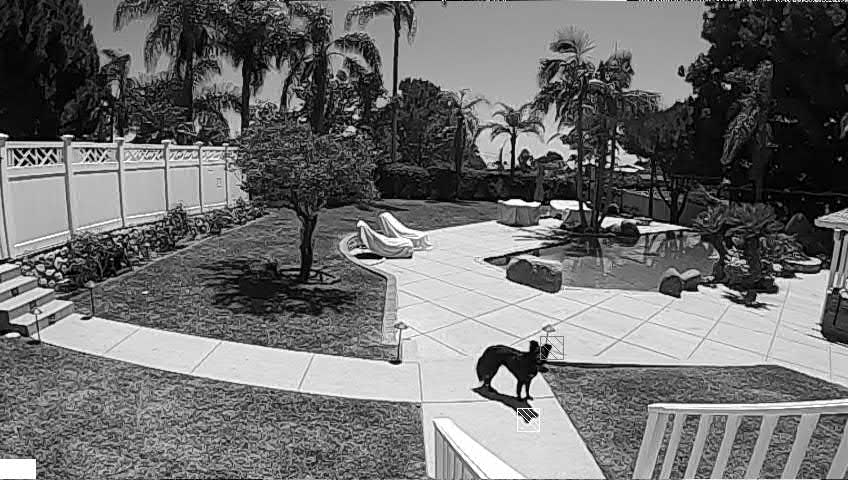 The file MISC\GL013585.jpg matches capture in DCIM\100GOPRO\GH013585.MP4. The cross-hatched boxes show where the motion was detected.

Instead of using Motion Mask feature, you can create an image mask to determine which part of the scene are used for detection.
There are many steps. Below is one approach using Windows 10 and a free image tool IrFanView

Now your camera is ready.